To assess the beliefs and behaviours of beachgoers in relation to beach flags and rip currents, to inform the development of an intervention to reduce beach drowning.

With the Australian coastline spaning over 30,000 kilometres beaches are one of Australia’s greatest natural resources. Nonetheless, beaches may present natural hazards, such as powerful shore breaks and rip currents, or rips. Rips are strong currents that take water back out to sea and are able to carry a person more than 100 meters offshore in less than a minute. Rips are the major cause of surf drownings and rescues in Australia. Most rip-related drowning deaths occur on unpatrolled beaches or outside of patrol hours.

The end goal of the Science of the Surf project was to provide people with basic knowledge about beach safety, enabling them to make informed decisions about where to swim. Following a baseline survey which investigated what type of information would be most useful to beach users, a beach safety campaign was developed and implemented. An evaluation was performed, investigating the campaigns reach and its effectiveness in promoting key campaign messages.

A baseline survey was performed at two coastal sites in New South Wales, Australia. Randomly selected people (aged 14 years or older) were interviewed on patrolled and unpatrolled beaches. They were asked 26 questions about their personal characteristics and their beliefs and behaviours relevant to beach safety, including their knowledge about rips and other beach hazards. As part of the interview, people were asked to identify the safest place to swim on a number of photographs, including the one below, picturing an unmarked rip on the right hand section of the shore. 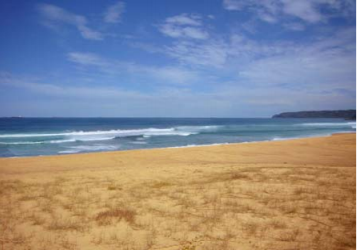 A total of 175 males and 200 females responded to the survey. It was found that:

Williamson, Ann, et al. "A comparison of attitudes and knowledge of beach safety in Australia for beachgoers, rural residents and international tourists." ANZJPH 36.4 (2012): 385-391.

Two coastal holiday destinations in New South Wales, Australia, were involved in the study; one as an intervention area which received the safety campaign, and the other as a control area. Data collection for campaign evaluation occurred at 3 time-points: